I recently traveled to Austin, Texas for a conference for digital local news publishers who cover issues important to underserved and underrepresented communities. It was great meeting other publishers from across Canada and the US. Austinites are well-mannered, hip, and laid-back. Downtown Austin comes alive at night with its vibrant live music scene.

Bill C11: The online streaming bill is now being discussed in the Senate, which would modernize Canada's broadcast law to include platforms like Netflix, YouTube, Spotify and TikTok. It would require platforms and streaming movie studios to promote certified Canadian content and give the Canadian Radio-Television and Telecommunications Commission (CRTC) broadcast regulator "the power to micro-regulate” content on their platforms in Canada.

Canadian TikTok and YouTube creators don't want to complete forms to prove their content is Canadian. Some creators say they may move to the U.S. or spoof an online location there to skip the extra required paperwork. Under the current law, the CRTC requires producers of films and TV programs with video over five minutes to fill out an onerous 30-page form to certify their work is Canadian.

Film event: American documentary filmmaker and director, Shalini Kantayya, will be in Toronto to screen her film, TikTok Boom (Trailer here) followed by a conversation. The film delves into the platform along myriad cross-sections—algorithmic, socio-political, economic, and cultural—to explore the impact of the history-making app.

The in-person screening is hosted by the Univerity of Toronto Rotman School of Management on Wed, 30 November 2022, 7:00 PM – 9:00 PM EST. Ticket information is here. If you want to watch the film online, PBS is currently screening the documentary film for free here.

"At a time when Canada needs to inspire innovation and adaptation to have its creative and other industries flourish, Bill C-11 seeks to stuff the infinite opportunities of the internet into an Act designed for a world of limited resources and scarce opportunity."

Angelina Nayyar is a 20-year-old Toronto content creator, DJ, and university student. She goes by @angelphroot on Instagram and has almost 68,000 followers. In the summer of 2021, she was diagnosed with "ulcerevenative colitis" and became immuno-compromised. The disease and the pandemic kept her indoors which is when she decided to seriously focus on content creation as her main source of income.

Nayyar took advantage of Instagram's short video "reels bonus" program that offers creators a monetary bonus for getting a certain number of views. She got paid $500 for her first video that reached a large audience. But she didn't get paid for additional bonus videos that reached even more views, earning between $1000 and $2000. She calculated she was owed almost $4,000 by Instagram and hadn't been paid for a year. She tried contacting Instagram and Meta several different ways. Anyone who has tried to contact them through a support email or number knows they don't make it easy. The company continued to repeat the response that they were looking into it but couldn't do anything about it. Exasperated, Nayyar contacted CityNews in Toronto, who contacted Meta, which discovered there was a bug that prevented the creator from being properly enrolled in the program to receive payments.

Nayyar says, she likely will discontinue creating content on Instagram even though social media is her main source of income:

“After this, I feel like I don’t want to keep working on a platform so volatile and unsupportive of its creators. Now, most of my audience is on TikTok — at least there, I can reach my followers in larger numbers even if I’m not getting paid."

In UK, US, and Canada, there is currently no legislation that covers how people are treated online. Inequity exists in the unregulated influencer marketing industry. A report called Just Influence 2022, found that the online racial pay gap is 22% between fees paid to black and white creators in the UK.

Furthermore, the report found that 35% of respondents indicated there was a direct correlation between speaking out on discrimination and social justice issues and brands not wanting to work with them. Charlotte Williams who runs an influencer agency said,

“There’s no standardization in our industry. It’s the wild wild west."

"need to be accountable for their actions and be consistent. Now is the time for influencer marketing regulation and legislation. We shouldn’t be scared of that.”

In May 2022, Britsh Members of Parliament formed a committee and recommended the government investigate standards in the influencing industry. The committee was in support of the UK-based Society of British Advertisers (ISBA) creating an influencer code of conduct.

The current Equality Act 2010 protects people in the UK from discrimination based on their race. The goal is for the Act to achieve fairness and equality of opportunity for everyone regardless of ethnicity or socio-economic background and that also includes media companies and brands with regard to online influencers and creators. The influencer marketing market size was valued at a record $16.4bn in August 2022 by the research group Statista.

For content creators just starting out, it's tough to get a foot in the door especially if you are a visible minority. Canadian-American actor, film producer, and businessman Ryan Reynolds wants to help budding content creators reach their potential and created a non-profit called The Creative Ladder. The organization's mission is to create the next generation of creative industry leaders from traditionally underrepresented communities and backgrounds.

According to the survey conducted by Creative Ladder,

"4 out of 5 creative professionals of color didn’t know their careers existed when they graduated high school. Together we can fill this gap with awareness and accessibility."

Creative Ladder is partnering with the Creatively, the job platform for creatives. They plan to give away $5,000 monthly grants to up-and-coming creative professionals in areas like design, advertising, marketing, and commercial production. 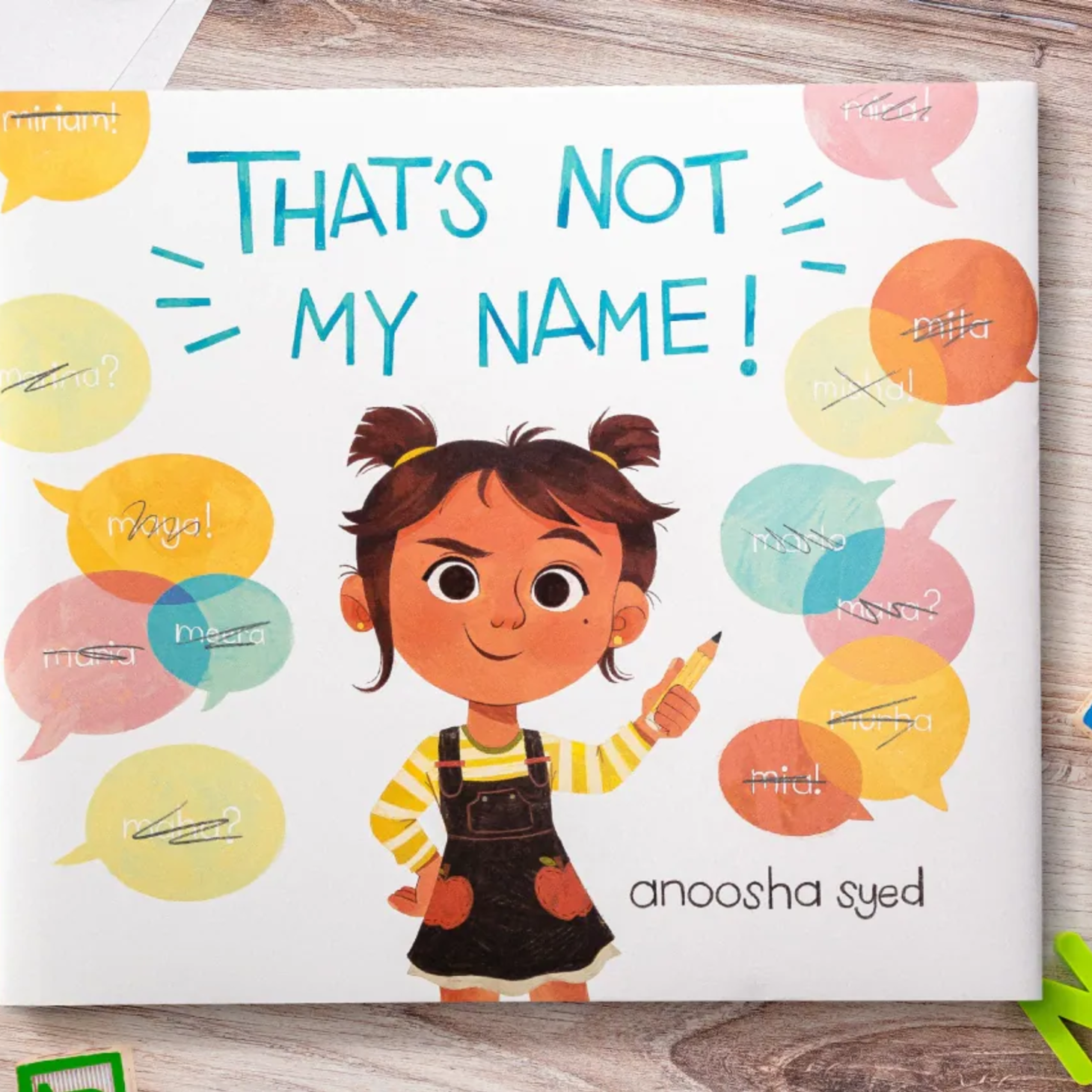 Pakistani-Canadian illustrator, author, and content creator, Anoosha Syed, published her children's book, That's Not My Name, earlier this year. She lives in Toronto with her husband and cat, Link. She illustrated over 20 children’s books and worked as a freelance character designer for clients including Disney Jr, Dreamworks TV, Warner Brothers, and Netflix. As a woman of colour, she tries to illustrate and tell stories with characters who are diverse.

Syed's debut book, That's Not My Name, is a picture book about learning to love your name, finding your voice, and standing up for yourself. The main character, a young brown girl, named Mirha, is excited to meet new friends and school. She feels like an outcast after her teacher, classmates, and people in cafes mess up and call her by the wrong name. Like so many immigrants with hard-to-pronounce names, Mirha in the story considers changing her name.

Loosely based on the author's life, Syed told CBC that she regrets going by the name Shelly in elementary school and Annie in college. She says real names are:

"a core part of people's identities. But when it is continuously mispronounced, it's hard not to feel belittled. And when that compounds over time with the many other big or small ways that people of colour in Canada face bigotry, it can negatively impact your self-esteem."

Syed says her husband, whose name is Danyal, decided to integrate and accepted being called Daniel. She feels he discarded a part of his cultural identity to fit in. In an interview with Diverse Books, she said,

"I wondered about all the kids from the diaspora living in the western world who have his experience, too—feeling like they have to shed their identity to fit in, or they won’t get anywhere in life, and they have to change themselves to make it easy for other people. I felt that was wrong, and that isn’t the message kids of the diaspora should receive while growing up. So I decided that this is what I want my first story to be about."

Syed does understand why actors like Riz Ahmed, the UK actor, shortened his name from Rizwan. However, by doing so, she says,

"When you don't have that sort of representation, you feel left out; you feel like there's not really a place for you in society."

In the book, after Mirha's mother explains that her name means "happiness", she returns to school the next day determined to correct anyone who says her name wrong.

Random acts of kindness matter more than you think

A recent study published in the Journal of Experimental Psychology found that small gestures matter more than you think. Researchers found that givers tend to focus on the object they're providing or the action they're performing while receivers concentrate on feelings of warmth and acts of kindness. Givers often have "miscalibrated expectations" and may be less prone to behaviors associated with helping, sharing, or donating.

One of the study's authors, Amit Kumar, associate professor of marketing and psychology at the University of Texas in Austin told the New York Times,

“People tend to think that what they are giving is something small, maybe relatively insignificant...But receivers are less likely to think like that. They see the gesture as much more meaningful because they also think about the fact that someone has done something nice for them."

Tara Cousineau, a clinical psychologist, meditation teacher, and author of The Kindness Cure says stress and overthinking makes some people feel uncomfortable about being kind to others. Cousineau says:

"The 'judgemental little voice' in people's heads that makes them question whether their gesture or gift will be misunderstood, or will make the recipient feel pressured to return it... When the impulse to kindness arises, we overthink it.”

Cousineau points out that an act of kindness is unlikely to backfire and often triggers more "pay it forward" kindness by others. If you want to develop a habit of performing random acts of kindness, start with your talents and skills that could make others feel happier. They'll appreciate the gesture more than you know.

To share this issue, use this link. To view past issues on the Web, go here

For questions, comments or sponsorships, reply to this email or email flavian@spinningforward dot com

If you want to suggest a story or a creator to profile, click here or the "Suggest a link" at the bottom of any issue.

Thanks for your interest in the Spinning Forward journey! We appreciate you

To contact the publisher of this newsletter if any comments or questions, email flavian@spinningforward.com.