The last couple of years feel different in the way companies are responding (or not responding) to sensitive social issues that are important to employees and customers. The Financial Times published an article in March 2022 titled, When should business take a stand? In the same month, Politco published a piece called, Inside the Progressive Movement’s TikTok Army. In the past, employees and customers were not very vocal when companies and brands made decisions that violated their values. Something shifted in the past couple of years. Today, employees and customers expect companies and brands to take a stand on complex political, social, and moral issues. I think the shift is being led by Gen Z coupled with the immediacy of the Internet.

Earlier this year, Starbucks surveilled and fired several employees who were involved in a unionization effort. After the firings, Gen-Z for Change, a non-profit that uses social media to create change, asked their TikTok army of activists to flood Starbucks with 88,000 fake job applications. A long-time Starbucks executive, who opposed the unionization resigned in June.

Brands looking to appeal to Gen Z need to be fun, authentic, and good. In a 2020 study by The Center for Generational Kinetics and commissioned by WP Engine, a majority of Gen Z expect the following from brands:

Be fun. 65% of Gen Z goes to the Internet for access to entertainment

Be authentic. 82% of Gen Z trusts a company more if the images they use in their ads are of actual customers

Be good. 72% of Gen Z is more likely to buy from a company that contributes to social causes

The consulting firm, McKinsey published their Consumer Pulse survey in May 2022. They found the biggest concern for younger consumers is that:

"companies are transparent and show that they care for people (employees, customers, others in their communities)...younger consumers prioritize authenticity and social issues such as diversity, equity, and inclusion.”

“When it comes to serious matters, such as racial justice, gender equality, and climate change, people on Twitter not only welcome brands into these conversations but expect them to speak up on behalf of their followers and others who share their values.”

The New Era of Corporate Political Responsibility: Let's compare reactions by brands to two racial events in the US. In 2014, Michael Brown, a black teenager was killed in Ferguson, Missouri by a white police officer, who was not charged. Brands remained silent despite unrest and protests. In 2020, George Floyd was killed by a police officer, Derek Chauvin, in 2020 in Minneapolis, Minnesota. Corporate executives in America and Canada were quick to make public statements expressing strong opinions about injustice before and after Chauvin was convicted.

Elizabeth Doty, the director of the corporate political responsibility task force at the Erb Institute, University of Michigan describes the shift over the past 5 years as “remarkable”. She says companies today are:

"shell-shocked by the frequency of need and the ballooning requests to engage”.

In a time of increasing racial injustice, gender equality, war, and economic inequity, this period is being called the new era of "corporate political responsibility".

For brands, the risk of not speaking out quickly is far greater than remaining silent. Expect consumers, led by Gen Z, to continue to hold companies accountable for communicating their values and purpose based on being good, authentic, and fun.

Have an awesome week!

If you enjoyed this issue, please share it with a few friends, especially young people.

If you have a story idea, please share by hitting reply or clicking on one of the feedback links at the bottom.

The pandemic has taught us that life is too short. You should just do whatever it is you desire to do. It’ll work out some way in the end.

If you live in Canada, you or someone you know may have been hacked on Instagram recently. The platform has seen a big increase in hackers getting access to personal accounts. After taking over an account, hackers post and promote different forms of digital investments, like ForEx trading and cryptocurrency.

Instagram crypto scams fall under general social media “hacks” but are mostly considered phishing scams. According to the Federal Trade Commission (FTC), social media is a goldmine for scammers who stole $770 million from Americans in 2021 (three times the previous year). Their goal is to get you to invest in fake investment sites or give them your crypto credentials, so they can steal your money.

In Toronto, a small business owner had his account hacked by a scammer who pretended to run his online business and engage customers. The scammer quoted prices, immediate delivery upon payment, and provided bank transfer details for an account in Houston. After going back and forth with Instagram support without success, the business owner got his account back with help from Citytv News. His future plans are to sell directly from a website, a blog, or other more secure platforms. Meta suggests users who've had their Instagram accounts hacked visit their help center online since they don't provide telephone support for Instagram. This cybersecurity company offers various tips, the most important one being, DON’T CLICK ON ANY LINKS.

Instagram Hack Insurance: Israeli-based tech startup, Notch is the first company to insure creators who get hacked. They offer insurance for NFTs and Instagram. The way it works for Notch's Instagram insurance is that a customer pays a monthly premium starting at a minimum of $8 per month. Notch pays the creator a daily stipend after they are hacked up to a maximum amount (or 90 days) and also helps them regain access to their account.

Creators are speaking out and becoming activists on social media

After Roe v Wade was overturned, Canadian TikTokers responded with support. They used the hashtag #wegodowntogether to let Americans seeking abortions in Canada that their doors were open. One TikToker posted,

If you want to come ‘see my cows’ for the weekend let me know. I can give you a safe space while you recover from ‘seeing my cows.

"Travelling to Canada isn't a viable option for the marginalized Americans who will be most impacted by abortion bans...Those who can afford to come north of the border for an abortion would likely prefer to be put up in a paid hotel room than stay in a stranger's home."

What's noteworthy about Gen Z is that their identity is shaped by their personal conversations in-person and online. Ioana Literat, a researcher who studies youth political participation on social media, says,

"TikTok is such a fitting space for those discussions because political expression on TikTok is quintessentially personal.”

Most observers see TikTok as a fun light-hearted platform. But Gen Z who have had to deal with climate change, gun control, racial justice, the pandemic and now Roe v. Wade are increasingly becoming activists and sharing their views with their followers on social media platforms. After the Supreme Court's ruling, hashtags like like #roevwade, #womensrights, #abortion, #prochoice, and #prolife received billions of views.

Gen-Z for Change is a non-profit led by young people. It uses social media to educate, encourage and mobilize civic participation, shift the political debate, and enact change. It has created a coalition of about 500 progressive social media influencers covering the Internet's most trafficked social media platforms. Their influence represents about 500 million followers, about 100 times higher than US cable networks. Olivia Julianna, who is Gen-Z for Change's political strategist posted a video on TikTok in September 2021. She encouraged followers to send fake tips to an anti-abortion whistleblower line in Texas. The line allowed Texans to report suspected violations of the state's new six-week abortion ban that became law in early 2021. The line was forced to shut down after being overwhelmed with fake memes. 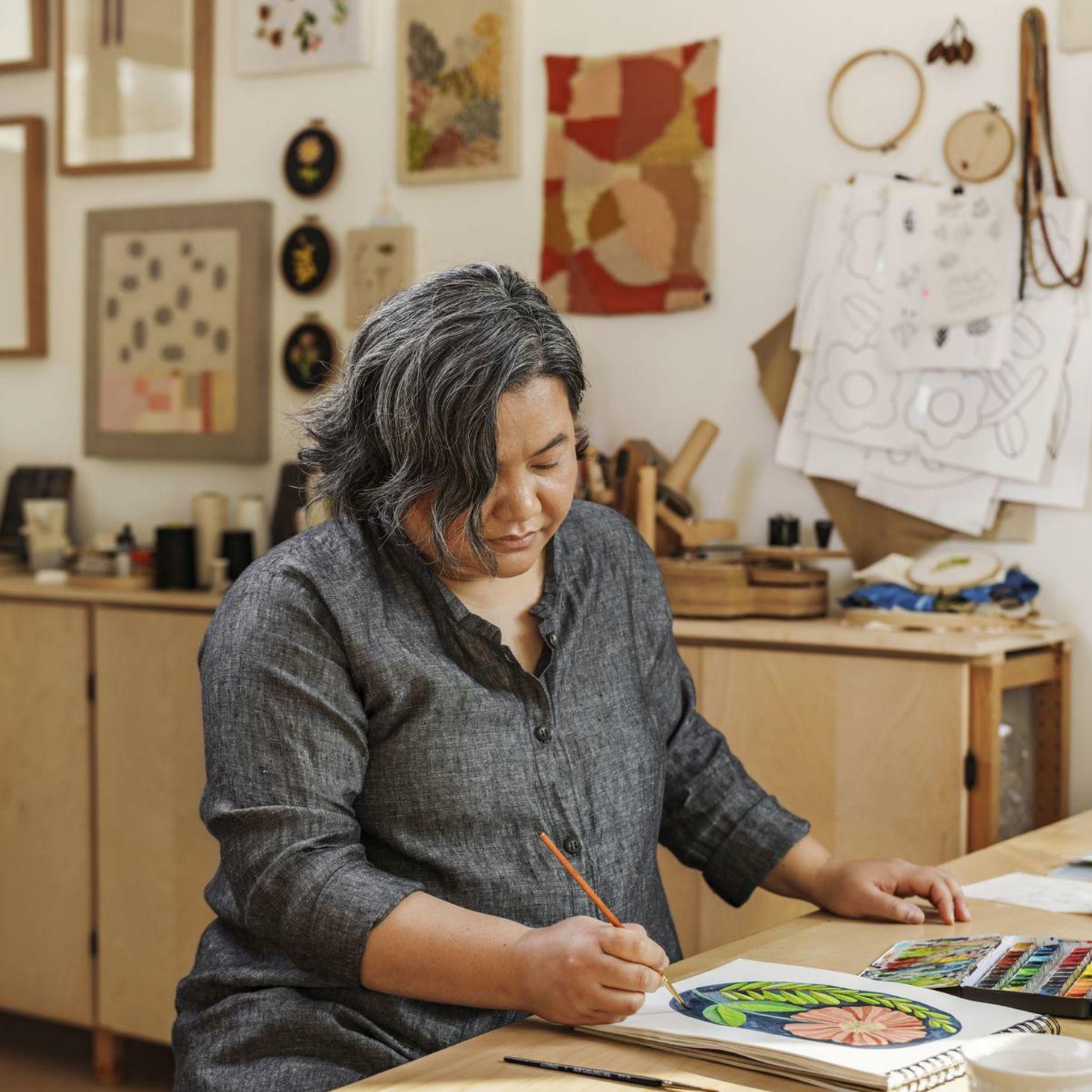 When she was four, designer, Arounna Khounnoraj's family immigrated to Toronto, Canada from Laos via Thailand. The family made things because they were poor. Her mother made the kid's clothes and her father made their furniture from discarded items at a design furniture company he worked at. The family believed that if you could make something, then you should. Khounnoraj always made things growing up, which led her to go to art school. She started as a sculptor and painter and moved towards becoming a textile artist using embroidery, punch needle, and sewing.

Khounnoraj launched her company, Bookhou, with her husband in Toronto in 2002. In 2017, she posted an Instagram video showing her punch needling. It went viral with 500k views, which lead to her first book, Punch Needle. Her posts at @bookhou, with over 375k followers, feature mostly needle and thread creations with lots of experimentation and imperfection. Her newest book, Embroidery: A Modern Guide to Botanical Embroidery is a modern guide to using the ancient craft to enhance everything from handbags to cushions with stitched flowers and leaves.

“I never thought I would be part of creating a trend.”

She offers punch needle workshops and retreats, writes books, has an online store, and continues to make videos to capture her one-of-a-kind process. Bookhou is completing five licensing deals, as far away as Japan, to use its hand-drawn designs on fabric and other goods.

The pandemic has taught us that life is too short. You should just do whatever it is you desire to do. It’ll work out some way in the end.

Most people I've met over the years have confided that they have experienced imposter syndrome. Two American psychologists, Pauline Clance and Suzanne Imes, in a 1978 study, found that one-third of young people and 70% of everyone else suffers from imposter syndrome at some point in their lives. They describe imposter syndrome as:

“phoniness in people who believe that they are not intelligent, capable or creative despite evidence of high achievement.”

Imposter syndrome is associated with 3 attributes:

UT Austin professor, Kevin Cokley in a 2017 study, found visible minority students who experience impostor phenomenon, in certain cases, have lower self-esteem, a lower sense of well-being, and mental health issues. The reason is that before entering a new environment, they already feel compromised due to perceived racial discrimination. Cokley says,

Some strategies to fight imposter syndrome and reduce your self-doubt include:

If you want to suggest a story or a creator for a future issue, just click on the Suggest a Link at the bottom of any issue. We'll let you know very soon if we give it the thumbs up and add it in a future issue.