I'm sorry about the delay in sending this issue. I was preoccupied after the SCOTUS decision last Friday.

Then on June 24th, the US Supreme Court overturned Roe v Wade, which exploded on social media with Americans and people from around the world expressing strong views. Popular American Twitch streamers shared their thoughts on Twitter. Top of mind for marchers at Toronto Pride was the erosion of abortion rights in the US as marchers chanted, “Abort the Supreme Court”. The fear is that LGBTQ rights are under threat.

What struck me was a New Yorker article published on the weekend titled, "We’re Not Going Back to the Time Before Roe. We’re Going Somewhere Worse." The article shows that while easy to outsmart surveillance then, it is very hard today:

We have entered an era not of unsafe abortion but of widespread state surveillance and criminalization—of pregnant women, certainly, but also of doctors and pharmacists and clinic staffers and volunteers and friends and family members, of anyone who comes into meaningful contact with a pregnancy that does not end in a healthy birth. Those who argue that this decision won’t actually change things much—an instinct you’ll find on both sides of the political divide—are blind to the ways in which state-level anti-abortion crusades have already turned pregnancy into punishment, and the ways in which the situation is poised to become much worse.

Surveillance and criminal charges already happen in some states like Missouri and Texas. Expect the remaining anti-abortion states to follow soon. You may not be aware that your mobile phone tracks a huge amount of data like your browsing information, Google searches, location data, social media activity, and payment history. If reproductive healthcare is criminalized, expect the courts to issue a warrant for your phone, which has all your personal information. Law enforcement, even without a warrant can buy your data from private companies called data brokers. Data brokers quietly buy and sell your personal information every day. The fact is that data brokers already sell location data of people who visit abortion clinics in the US.

Even more alarming is that some states like Missouri are considering laws that make it illegal to "aid or abet" abortions by crossing state lines to bypass restrictions. Marginalized Black, Latino, Native Indian and immigrant communities who already face discrimination often need much more assistance and are likely to be targeted. For example, law enforcement may pursue supporters for mailing medication across state lines or for helping someone search where to get an abortion.

Content creators know each other across the US and Canada. What will happen to those creators who support a pregnant women from anti-abortion states who want an abortion? Because things are so unclear, abortion rights groups are advising anyone who calls their helplines to use secure browsers, email, and encrypted services like Tor private browsers, messaging and email services like Signal, and Proton Mail when researching self-managed abortions. It's both difficult and expensive to securely use the internet and communication tools to avoid surveillance and detection all the time.

The overturning of Roe v Wade means that women will seek help and find ways to get abortions including traveling to Canada and Mexico. It's unclear if other anti-abortion states will enforce the ban as aggressively as Texas, which intends on prosecuting doctors and surveillance of women.

Have an awesome week!

If you enjoyed this issue, please share it with a few friends, especially young people.

If you have a story idea, please share by hitting reply or clicking on one of the feedback links at the bottom.

The original US constitution did not include votes for women. So if you’re an originalist, and you’re a female Republican voter, I’d think twice about that.

82-year-old Margaret Atwood and author of The Handmaid’s Tale, appeared at this week's Collision tech conference in Toronto with Yung Wu, CEO of MaRS Discovery District. Once described as the Prophet of Dystopia, she was optimistic saying:

"I'm really old...I can remember when it was worse...We didn’t have a lot of choice... It’s not the worst of times yet... We’re still in a moment where we could turn it around."

On the pending Roe v. Wade reversal, she referenced her Op-Ed in The Atlantic, titled, I Invented Gilead. The Supreme Court Is Making It Real. She said that the wording of the draft opinion by US Supreme Court Justice Samuel Alito notes that abortion is not mentioned in the Constitution:

Atwood, who is also an entrepreneur and a creator, ended on a positive note by talking about her “Practical Utopias: An Exploration of the Possible” project. She uses the Toronto-based creator platform, Disco. She wants to use the community and learning platform to bring people together collaboratively to address complex challenges — the climate crisis and social inequalities being foremost — to bring about a better future for everyone. You can watch Margaret Atwood's interview at Collision here.

Online Streaming Act claims to level the playing field … but for whom?

On June 21st, the House of Commons voted to pass the Online Streaming Act or Bill C-11, despite concerns and pushback from critics, witnesses, and experts. Bill C-11 would allow the Canadian Radio-Television and Telecommunications Commission (CRTC) to regulate all online audiovisual content, forcing streaming platforms like Netflix and YouTube to showcase more Canadian-made content the same way it does for Canadian broadcasters.

The Act gives the CRTC the authority to determine what constitutes good Canadian content and would require streaming companies to highlight that content. The current bill serves to prioritize:

“the needs and interests of all Canadians — including Canadians from racialized communities and Canadians of diverse ethnocultural backgrounds”.

The Indigenous Screen Office, the Black Screen Office and Community Radio Fund of Canada support the bill but others like Jean La Rose, the CEO of Dadan Sivunivut, the corporate side of the Aboriginal People’s Television Network, say the bill does not ensure equal funding for Indigenous media.

Other critics like Michael Geist, the Canada Research Chair in internet and e-commerce law, and YouTube creator, J.J. McCullough with 785k subscribers say the bill gives the CRTC too much overreach over the streaming platforms. This includes manipulating algorithms that may result in reduced Canadian content creator visibility and earnings. 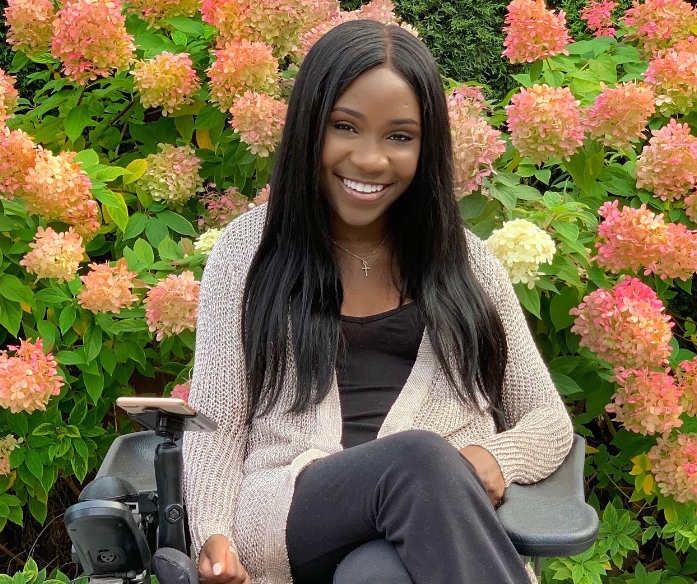 Toronto Black and disabled TikToker Taylor Lindsay Noel started posting restaurant reviews under #AccessbyTay in May 2022. Her account grew quickly from zero to almost 10k followers in two months. She provides a video review and an accessibility and experience rating out of five stars for restaurants she visits. She says people relate to video and she enjoys describing how she navigates the space in a restaurant in her wheelchair.

At the age of 14, the elite gymnast was on track to represent Canada at the London 2012 Olympic Games. During gym practice, she broke her neck while attempting a difficult and dangerous maneuver and became a quadriplegic, becoming paralyzed from the neck down. She sought help from physical therapists and mental health professionals to overcome severe depression. With strong faith and family support, she took charge of her life, completed a university degree, and launched a podcast, Tea Time with Tay. This led her to create a high-end online luxury organic tea company Cup of Te. Her business was featured in O Magazine’s “Oprah Winfrey’s Favorite Things” in the December 2020 issue. She has some advice for dealing with adversity and obstacles:

There’s life after tragedy. I’m hoping to break other glass ceilings. I’m a female, Black, disabled, small business owner … and I’m still here. NO is not a real word in the capacity of your life.

She was interviewed on the Tamron Hall Show and announced she would be opening the first Cup of Te physical store in Toronto in summer 2022.

Fundamental Attribution Error: Don't judge a book by its cover

We learn in history that Napoleon’s leadership and strategic skills were the reason for the French army’s success in the early 1800s. Or we believe player X or coach Y was solely responsible for a team winning the season.

This tendency where people "overestimate an individual’s influence and underestimate the external, situational factors around them" is called the fundamental attribution error. For example, if an employee is late for a meeting, you might see them as lazy. Yet, when you’re late, you give an excuse based on outside factors.

Rolf Dobell, the author of The Art of Thinking Clearly, writes that the fundamental attribution error helps us whittle negative events into convenient little packages. For example, people tend to view low-income people using food stamps as unwilling to work and make the assumption, “If they just tried harder, they’d have a job.”

The fundamental attribution error happens when we focus on someone’s personality over external factors. For example, a low-income person may be a single parent, illiterate, suffer from mental health, come from a dysfunctional family, be dealing with an economic recession, or have limited access to job opportunities.

The solution is to focus on the context or the big picture before the person. This requires you to change your mental model, which is an explanation of how something works. It’s hard to do but delaying judgment helps you better understand and see someone’s actual circumstances and motivations. Listening increases empathy and makes it easier to walk in their shoes for a while.

If you want to suggest a story or a creator for a future issue, just click on the Suggest a Link at the bottom of any issue. We'll let you know very soon if we give it the thumbs up and add it in a future issue.